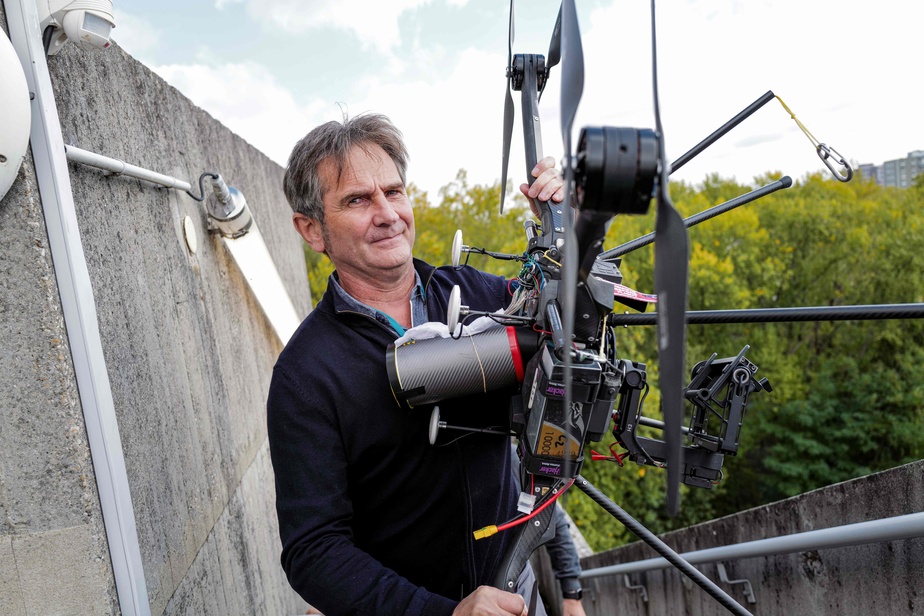 (Villeurbanne) Drones over the stadiums soon? A young company from Lyon, founded by rugby enthusiasts, has developed a guaranteed fall protection system that can revolutionize the way sports events are filmed.

"The regulations practically prohibit piloting a drone in areas with the public", because of the risks in the event of a breakdown, explains one of the founders of Hyperion 7, the academic Philippe Grandjean. .

His fledgling startup therefore developed a drone equipped with a mini flying wing (similar to that of a paraglider), activated by a pyrotechnic system to prevent the craft from diving in the event of damage. The drone, attached to a 200 meter long cable, can then be carefully returned to its starting point with a winch.

Geologist Philippe Grandjean has long been interested in drones because of the contributions they can make to soil research. To the point of becoming the "droneman" of the CNRS and now devoting all his time to these roaring machines.

As such, he was already in regular contact with the General Directorate of Civil Aviation (DGAC), the body responsible for overseeing aviation safety.

"From the start we went hand in hand with the DGAC," notes Olivier Nier, also one of the seven founders.

Former rugby and current leader of CS Vienne Rugby (Fédérale 1), Mr. Grandjean had known sociologist Olivier Nier for a long time, another teacher at the University of Lyon 1 with a long career as a rugby coach (Romans, Massy, Aix, Oyonnax…) and coach (Romania, Switzerland).

Over a drink given by Jérôme Pineau, who has long been "the voice of rugby" at Canal +, they meet Laurent Daum, director of Top14 matches for the scrambled channel. And from that night on, the idea arose to start this crazy project.

An IT specialist, case preparation specialist and financial auditor – all rugby players – will complete the team.

Today, the young company with four employees funds itself by participating in research projects. Under the leadership of Mr. Nier, by far the largest shareholder, it does not intend to open its capital until 2023 and sell its first systems.

The Hyperion 7 Drone Advantage? According to the promoters, it is three times cheaper to run than "spider cams", which are currently used for bird-eye viewing during televised matches.

And above all, it can be implemented in a very short period of time on any sporting event, including events held outside stadiums, such as ski competitions … or camel races (another markets explored by the startup).

But the DGAC made the founders of Hyperion 7 aware that the applications of their machines could be far greater than they imagined. Especially in the field of security.

The cable can be used to power the drone for hours. With the integration of an optical fiber, it can be controlled without the risk of being "hacked".

The fiber also makes it possible to recover the information collected by the cameras and other sensors installed under the drone.

Hyperion 7 was thus selected as part of a European project to study how its drone could carry the antennas of a heavy SAR-type radar, while keeping the signal processing facility on the ground. Such equipment, capable of "reading" the subsurface, could be used in a future exploration of Mars to try to discover water there.

"We will be conducting tests in very dry areas such as Morocco, Botswana, Namibia …", Mr. Grandjean said.

But for now, the immediate news of Hyperion 7 is much sober: the broadcast of a Top 14 match. Ideally before the end of the year, in the den of Gerland of LOU Rugby, the dream of the founders.