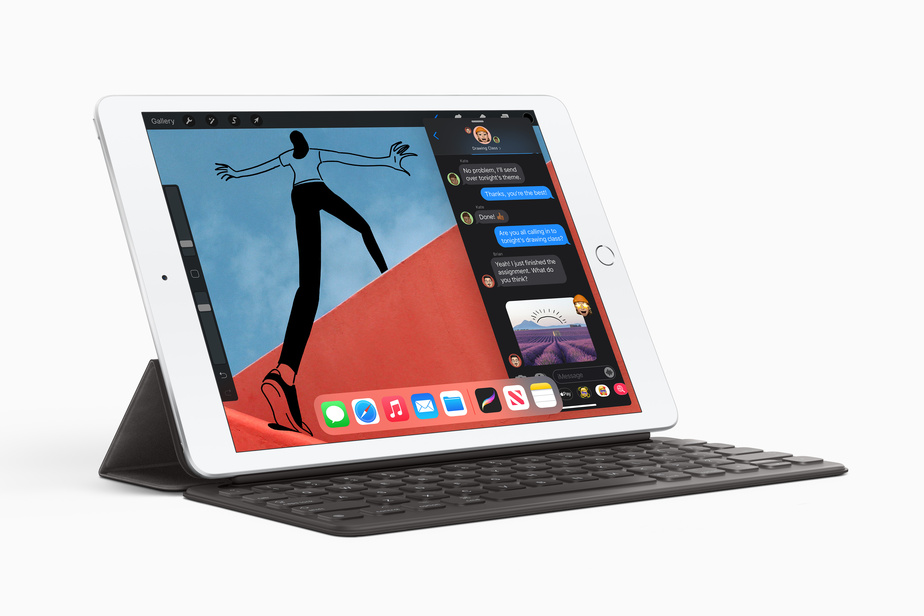 Take the queen of tablets since 2010 and add power and speed. That's about all Apple changed for the 8th-generation iPad announced in mid-September. The crown will be preserved, although we would have liked a little more daring for this ten-year anniversary.

The 8th generation iPad is practically a copy of the 7th generation released in 2019, with two exceptions: it now has an A12 Bionic processor instead of the A10 Fusion, as well as an artificial intelligence called Neural Engine. In French, this means that it is significantly faster and some of the calculations are done on the device itself rather than by an external server.

No doubt the latest iPad is lively and beats all its predecessors that we tested at the same time. According to several specialized websites, the A12 Bionic processor is between 60% and 100% more efficient than the A10 Fusion. Opening La Presse + or Spotify takes half the time – we're talking a one or two second difference, all the same – than on our iPad 6, and the transition between applications is almost instantaneous.

Let's not even talk compared to our oldest iPad, 4th generation from 2012, but still functional. We mention it just to emphasize the durability of these devices, which have been a school favorite since their invention.

Another minor innovation, the 8th generation now comes with a Lightning cable that plugs into a USB-C input, making it compatible with MacBooks.

The price remained the same as in 2019 at $ 429 for the base 32 GB model. We still find the 10.2 inch screen, with a resolution of 2160 by 1620 pixels for a density of 264 ppi. It's bright, at up to 500 nits, the colors are vibrant, and the details are well-crafted. Small interesting detail: the glass is oleophobic and ensures that it does not hold too many fingerprints.

The new iPad is slightly heavier, 490 grams instead of 483 for the Wi-Fi version, and remains at 7.5 mm thin as last year

The tablet is compatible with the first generation Apple Pencil, Bluetooth touchpads and virtually all game controllers. Apple has also designed a homemade keyboard, the Smart Keyboard. All these accessories are of course not included in the purchase.

The front camera has remained strictly the same, placed on the left side of the tablet with a resolution of 1.2 MP and a capacity of 720p in video. That's good enough for conference calling, but you won't win any photo or video prizes. It's a bit sturdier at the rear, with an 8MP wide angle, but again we're a long way from the photographic performance of the best phones, with less contrast control and less rich colors. . Obviously, this isn't the iPad niche.

No Face ID here for face unlock or a fingerprint reader under the screen. We trust the good old Touch ID with the round button that takes you back to the home page.

We can't wait for the day when Apple finally decides to drop its Lightning port for USB-C. The case is progressing, the new iPad Air, iPad Pro and MacBooks have already made the leap.

Apple devices tend to bicker and don't always accept non-genuine cables. The 8th generation iPad is even more discerning and almost only accepts the included cable.

Apple's home keyboard, the Smart Keyboard, has a nice touch, but the layout is annoying. After two weeks we still can't fold it properly to support the tablet. And the 8th generation iPad is unfortunately not compatible with the fantastic Magic Keyboard.

The starting offering of 32 GB advertises an attractive base price of $ 429, but this storage is clearly insufficient in 2020. And there is only one other configuration, with 128 GB, sold for $ 549 for the Wi-Fi model and $ 719 for the mobile version.

The quality of design, design and richness of Apple's ecosystem have made the iPad the benchmark for tablets. And between the more limited iPad Mini and the enriched versions such as the iPad Air and the iPad Pro, it is the iPad itself that is the most popular product in this category with 500 million units. sold since 2010. The 8th generation brings some interesting little improvements. They don't justify throwing away your under-five iPad, but the iPad for 2020 is definitely a great buy.