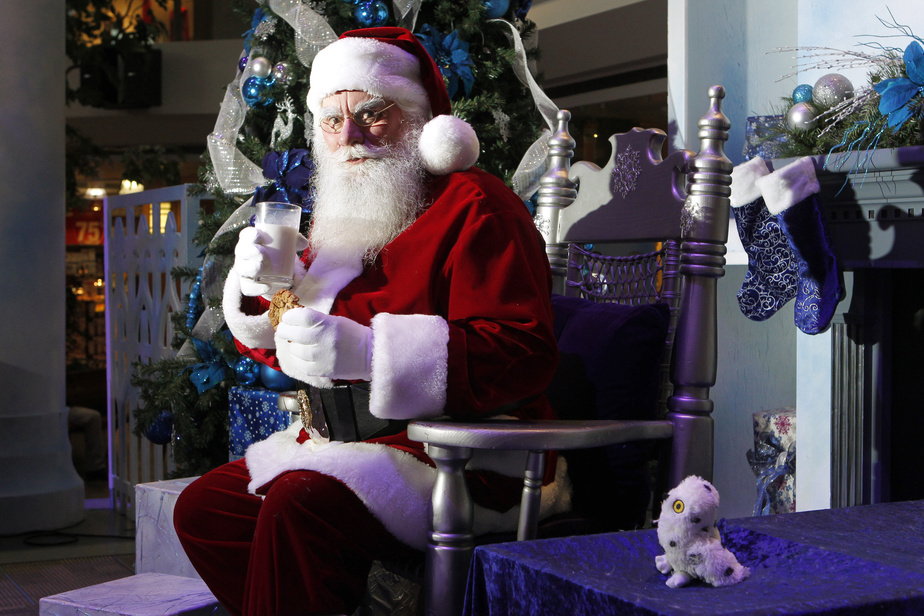 Whether you keep a distance of two meters or via a webcam, the encounter between Santa and the children that malls provide will be very different in this year of the pandemic.

The magic of Christmas will still be there, promise Quebec malls managers The Canadian Press spoke to.

At Carrefour de l & # 39; Estrie in Sherbrooke, children, like all of Groupe Mach's malls, are used to visiting Santa Claus in his kingdom.

During this exceptional holiday season, the old man with the white beard sitting comfortably at the North Pole will virtually ask them if they have been good this year and what they would like to see under the tree.

"He's a real Santa Claus, but behind a screen," said Daniel Durand, senior director of marketing and communications.

The child will interact "real time". The conversation can be recorded for the family to remember. A photo is also taken. The meeting will be possible from a room in each shopping center and will be by appointment "to avoid meetings".

The formula has the advantage that neither the child nor Santa Claus need to wear a mask. However, all other people will be required to follow a health protocol.

The operator says he has used creativity and innovation to make the experience "as magical as possible" for families and children "despite the current situation."

Same speech at mall giant Cadillac Fairview, where "this holiday season will be like no other."

Children will be able to visit Santa Claus almost traditionally or completely virtually on any personal device they see fit.

The company, which operates 19 shopping centers, including Promenades Saint-Bruno, on the South Shore, and the Toronto Eaton Center, "rounds out the vacation experience" that will be offered from start to finish. across the country, Craig Flannagan, vice president of marketing, explained in English.

COVID-19 requires that in-person visits be redesigned to "prioritize security". They will have to be booked via the Internet and the child will not be able to sit on Santa's lap, as physical distance must be respected at all times.

In addition, Mr. Noel will wear a mask. "We have to put everyone's safety first," said Flannagan.

His team also envisions the traditional photo – which customers care about, he insisted – being taken while playing from perspective. In other words, the child would be six feet in front of Santa.

After each meeting, the premises are disinfected. The operation will take about five minutes, Cadillac Fairview predicts.

Those who prefer to meet Santa without traveling can do so from their electronic device. & # 39; It's Santa, & # 39; Flannagan urged. He lives with you. He speaks and answers questions. "

The Cominar group, which operates 19 shopping centers in Quebec, including Mail Champlain in Brossard and Place Longueuil, declined The Canadian Press's request for an interview, saying it was "too early."

In an emailed statement, Vice President Jean-Marc Rouleau wrote that "the animation of public spaces will depend on the evolution of the situation around COVID-19".

Several scenarios were designed for the malls that usually house Santa and his kingdom, he said.

"One thing is certain: all our scenarios will respect both social distancing and the guidelines of the various public health and government agencies," the message indicates.

The Laurier Quebec Center is the only one of the four major shopping centers managed by Ivanhoé Cambridge that has traditionally had a Santa Claus.

As everywhere, she said that adjustments could be made along the way depending on the epidemiological situation.

More than ever, this holiday season, shopping malls must respond "strongly" and "clearly" to differentiate their offerings from the trend of online commerce, estimates the marketing professor at the School of Management. from the University of Sherbrooke, Deny Bélisle.

Not only are consumers more skilled and comfortable shopping on the Internet, but the pandemic has also made them more afraid to go to the store.

Shopping centers know that the "experiential aspect" strongly differentiates a personal purchase from the same purchase made online.

"On Amazon there is no decoration, there is no Santa Claus," he illustrated. That's why shopping center developers don't say, & # 39; We're giving up. We are going to place three banners and it will work. »»

In general, he says the strategies that stimulate traffic – by involving the physical presence of the child – are probably the most interesting for shopping centers, since the presence of the father brings Christmas & # 39; emotions. that have a positive influence on consumption & # 39 ;.

Those who will provide a completely virtual experience that can be enjoyed from the outside will not necessarily shoot each other in the foot, as they make it possible to make the place credible and possibly even communicate information to consumers. , communicate promotions to them, or collect information about them.

The holidays have "tremendous" significance for shopping centers, he said. Traffic is usually at its peak and sales are the biggest of the year. "If we miss our chance for the holidays, it will hurt financially," said Mr Bélisle.

He notes that while Santa's presence for shopping centers has a commercial purpose, it makes it possible to "create relationships in which everyone wins" as parents and their children have fun and make purchases.