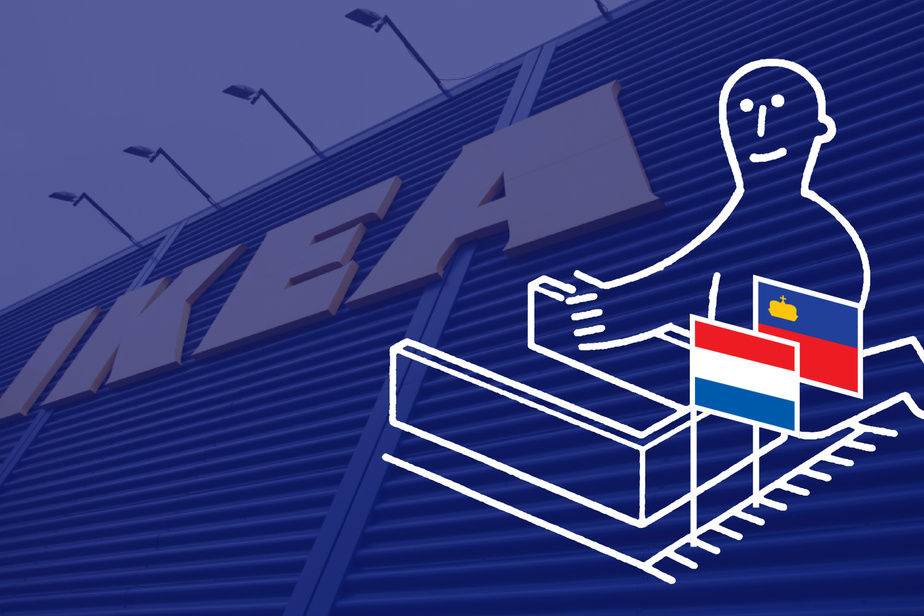 What better represents Sweden than IKEA? And yet, the famous furniture maker is previously established… in the Netherlands, where the European Commission is investigating some of its tax regulations.

IKEA uses yellow and blue from Sweden. Item names refer to Sweden. The design is Swedish inspired. The food in the cafeteria is Swedish.

However, contrary to popular belief, IKEA is not a Swedish company.

IKEA is more like two multinationals based in the Netherlands.

The first multinational, Ingka Group, operates most IKEA stores and is owned by a foundation in the Netherlands.

The second multinational, Inter IKEA Group, owns the IKEA concept and its intellectual property. It is ultimately owned by a foundation in Liechtenstein, a small country in Europe that is considered low. The two multinationals have made business agreements among themselves.

IKEA was founded in Sweden in 1943, but some of the company's activities moved to Denmark as early as 1973. IKEA has mainly operated from the Netherlands since the early 1980s.

In the crosshairs of the European Commission

Competition laws in Europe prohibit a country from offering an extraordinary tax advantage to a particular company. It's illegal state aid.

All companies, large or small, multinational or not, should pay a fair share of taxes. Countries [européens] cannot allow some companies to pay less tax by allowing them to artificially transfer their taxes elsewhere.

These words by Commissioner Vestager were published in 2017 when the investigation was opened, which is still ongoing.

The European Commission is targeting two tax schemes that were closed in 2006 and 2011 (the latter decision is still in force). These rulings by the Dutch tax authorities have enabled IKEA to lower its tax rate on its intellectual property income around the world.

"This is an aggressive form of tax planning," says Jan van de Streek, professor of tax law at the University of Amsterdam, in an interview with La Presse.

The first element of the investigation: the European Commission is investigating whether IKEA should have paid more tax between 2006 and 2011 on its intellectual property rights and franchise rights in the Netherlands. IKEA's franchise rights were partially owned by a company in Luxembourg, where IKEA did not pay tax on its income due to a tax arrangement under Dutch and Luxembourg tax laws.

According to the European Commission, a "significant portion" of the profits of the Dutch company Inter IKEA Group (Inter IKEA Systems) was thus transferred to the Luxembourg company which did not pay tax on those profits in Luxembourg.

In 2011, Luxembourg, under pressure from the European Commission, ended this special intellectual property tax regime.

The second element of the European Commission's investigation: the taxation of IKEA & # 39; s intellectual property income and franchise rights since 2011. That year IKEA transferred its intellectual property and franchise rights from Luxembourg to the current company in the Netherlands, Inter IKEA Group (Inter IKEA Systems), which bought the rights for EUR 9 billion.

Before paying tax in the Netherlands, Inter IKEA Systems has to repay the amount owed on its loan to the Interogo Foundation in Liechtenstein each year.

The European Commission is investigating whether the amount of the transaction and the terms of the loan are reasonable and comply with transfer pricing rules between member companies. The Commission currently considers that Inter IKEA Systems overpaid for the duties.

According to a document from the European Commission, Inter IKEA Systems could pay approximately EUR 70 million in income tax of EUR 400 million under the Dutch tax benefit scheme for the year 2014. and a turnover of 1 billion euros.

Over the past five years, Interogo's average tax bill in Liechtenstein was € 57 million, the company said by email.

The subsidiary of the Interogo Foundation, Inter IKEA Group, pays taxes in several countries for a total of € 301 million in 2019, of which 75% to the Netherlands and Switzerland.

Why did you transfer IKEA to a foundation? The main objective of the Interogo Foundation is "to ensure the independence and longevity of the IKEA concept", according to the Foundation. “The foundation prevents the fragmentation of shareholders, which could possibly happen with family ownership or a stock exchange listing. The Interogo Foundation must also have financial reserves for more difficult days, ”she says.

The plan of the empire

What happens when you shop at IKEA? Where does your money ultimately end up? Follow the seven-step plan.

When you shop at an IKEA store in Canada and on the IKEA Canadian website, you are dealing with IKEA Canada, the Canadian subsidiary owned by the Ingka Group.

The Canadian subsidiary generates sales of CAN 2.53 billion annually.

IKEA Canada does not disclose the amount of its winnings. Using Ingka Group & # 39; s total profit margin of 6% worldwide, we arrive at approximately C $ 151 million in profit for IKEA Canada.

For the past five years, the Canadian subsidiary IKEA Canada in Canada has paid an average of CAN 33.6 million in taxes per year. This is a tax rate of approximately 22% on its profits.

2) Ingka Group (company in the Netherlands)

In 2019 Ingka Group generated a pre-tax profit of 2.5 billion euros on a turnover of 39 billion euros, or a profit margin of 6%.

The company paid 682 million euros in taxes that year in dozens of countries, a tax rate of 27% on its profits of 2.5 billion euros.

A London "planning studio" of the giant IKEA

3) Ingka Foundation (foundation in the Netherlands)

Company in the Netherlands that operates the IKEA group and concept

This Dutch company is responsible for the franchising of the IKEA concept.

Inter IKEA Group has several subsidiaries in Sweden, the country where IKEA was founded. Here are five Swedish subsidiaries:

This Swedish company is responsible for making and designing IKEA products. Its employees mainly work in Sweden.

This Swedish company is responsible for managing products in IKEA distribution centers and delivers to stores everywhere.

This Swedish company is responsible for the production of IKEA products. It has approximately 20,000 employees in 43 production centers in nine countries (but not Canada). The top 5 countries where most IKEA products are produced: Poland, Russia, Slovakia, Portugal and Sweden.

This Swedish company is the group's communications agency. In particular, she is responsible for publishing the IKEA catalog.

This Swedish company is active in IKEA food and drink that can be bought in IKEA cafes and restaurants.

The main purpose of this foundation is "to ensure the independence and longevity of the IKEA concept, to own and run the Inter IKEA Group," according to the foundation's website. The Interogo Foundation reports paying taxes in Liechtenstein according to the tax laws of the country. His average tax bill for the past five years in Liechtenstein: 57 million euros per year.

This Swiss investment company is a co-shareholder of the Inter IKEA Group, to which it provides capital and loans. This Swiss company is ultimately owned by the Interogo Foundation.