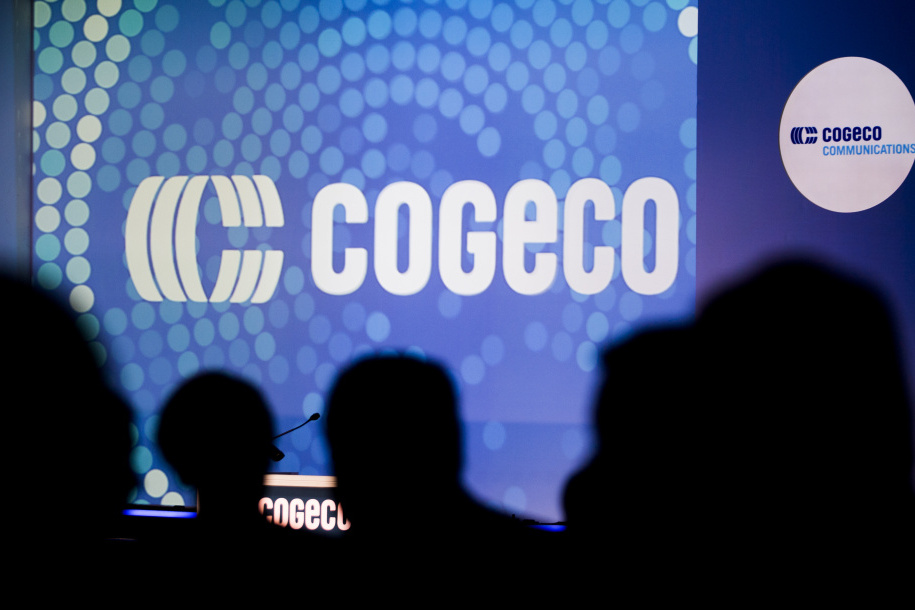 Cable operator Altice USA and Canadian telecommunications company Rogers offer more than $ 10 billion to purchase Quebec company Cogeco, which is controlled by the Audet family. How did this company, which started as a television station in the 1950s, become such a giant, although it has often been overlooked?

In 1990, the Cablenet cable company, controlled by the Torchinsky family in Edmonton, was up for sale. All the major Canadian players of the time, including Maclean-Hunter and Rogers, wanted to get their hands on the 200,000 subscribers in Ontario, Saskatchewan, Alberta and British Columbia. Against all odds, a small Quebec company won the offer for $ 254 million: Cogeco.

"It was a thunderbolt," said Louis Audet in an exclusive interview with La Presse. You almost had to be crazy to participate in this effort. We got a loser and we succeeded. We were very happy. We doubled our subscriber base. "

This event is a good illustration of Cogeco's history.

" We have always been the underdog (the neglected), "said Louis Audet, executive chairman of the board of Cogeco and its subsidiary Cogeco Communications

We were always supposed losers in the beginning. It's tough on morale, but at the same time it's an advantage because everyone underestimates us, and you have examples of this these days.

M. Audet declined to comment on the proposed buyout of Altice USA and Rogers, which the company unequivocally rejected, but this statement shows the value the company created around the same time as television in the 1950s.

Because the big dream of Henri Audet, Louis's father, was television. It does not exist in 1945, when Henri was hired as an engineer by the Société Radio-Canada, after graduating from the École polytechnique de Montréal and the Massachusetts Institute of Technology (MIT).

Over the next decade, however, de Montrealer joined Radio-Canada in setting up affiliated TV stations in several cities across the country. Seeing that Trois-Rivières was still free, he seized the opportunity and started his own station, CKTM-TV, in 1957.

“My father sold his house in Notre-Dame-de-Grâce, he moved his family, moved into an apartment, says Louis Audet. That is what all the money went for [la station].

The Audet family would later own two stations in Trois-Rivières and two in Sherbrooke, for Radio-Canada and TQS. But the ultimate dream is to have a large French-speaking network.

In the early 1980s, the Canadian Radio-Television and Telecommunications Commission (CRTC) was looking for an owner for a new French-language station. Despite tremendous efforts, the Audet family saw the license for TQS granted in 1985 to another family, the Pouliot family, owners of CFCF and CF Cable TV. Cogeco has to wait until 2002 to become a 60% majority shareholder in TQS, but it is too late.

They took possession of TQS in a very difficult situation. And TQS never really managed to become a big station with a large audience.

Richard J. Paradis, professor of communications policy at the University of Montreal

When Henri Audet & # 39; s dream comes to an end and that Cogeco should consider quitting television for good, his son consults.

"I admit I was disappointed," says Louis Audet. My father was retired and a bit older. I remember sitting with him and saying, "Henri, now we will have to let go of the television stations." And to my surprise he looked at me and said calmly and calmly, "Well, maybe we'll be there." "

Cogeco decided to secure TQS from its creditors, and the network was eventually acquired by Remstar in 2008.

" Based on the assets we owned, it was impossible to take a bigger place , continues Louis Audet, and we did well to concentrate on cable distribution. "

The vision of cable television

Louis Audet, Executive Chairman of the Board of Cogeco and its subsidiary Cogeco Communications

Beginning in 1968, the CRTC decided to grant licenses for cable distribution only to Canadian groups. However, La Belle Vision, which serves Trois-Rivières and Shawinigan, is owned by Americans. Cogeco bought it in 1972 and thus began its great adventure in what is today its main activity.

"The Canadian of the ether was an opportunity," explains Michel Arpin, who held various positions within the CRTC. . Cogeco saw the potential, saw that it was a growing industry. "

" There was a saying then, recalls Professor Richard J. Paradis. When we had a license from the CRTC, we had a license to print money. And that's pretty much what happened with the evolution of communications, which has made small businesses huge.

In 1987, Cogeco Cable tripled its customer base by acquiring several regional companies, including Câblestrie and Télé-Cable BSL. Then came the big turning point in 1990 with Cablenet and its penetration into Canada, England. From 1996 to 2001, Cogeco acquired 44 cable networks in Ontario and Quebec.

In Portugal, the great adventure came to an end in 2006 with the purchase of Cabovisao, the country's second largest cable operator. "It was hell, but an absolutely unpredictable hell," said Louis Audet, who had believed in the dynamics of the market.

However, the subsidiary soon suffered from the country's serious economic problems. Cogeco also found that the Portuguese state, through its support for national companies, was putting obstacles in the way.

Despite the country being a member of the European Union, it became clear that we had just set foot in a banana republic.

During the interview, Louis Audet spoke several times about the patience that helps to develop large, sustainable companies. “Sometimes great times go by without anything happening. The temptation is to get lost in other things. You have to be patient enough to wait for the right time.

The businessman speaks knowingly. Although he stated in the media in 1989 that the next step was expansion into the United States, the right moment did not come until 2012 when he bought Atlantic Broadband, which operates in Pennsylvania, Florida, Maryland, Delaware and South Carolina. This highly anticipated expansion will continue in 2017 with the largest acquisition in the company's history: the $ 1.4 billion purchase of MetroCast.

"During the takeover attempt of the last days, out of ten billion, five are attached to the American value, ”added Yvan Allaire, chairman of the Institute's board of directors. about the governance of private and public organizations. 'He had to find the right target, and it's not easy, the United States. This is a market where many Canadian companies have done their best. In that sense, the success in the United States is all the more remarkable. "

It was thanks to the Stock Savings Plan that Cogeco was able to purchase its first radio station in Laval in 1986, now Rythme FM. Cogeco now owns 13 Corus stations since its acquisition in 2011, including 98.5 FM.

Louis Audet followed in his father's footsteps by earning an engineering degree from the École polytechnique de Montreal, then a Masters of Business Administration from Harvard Business School. He joined the family business in 1981 and witnessed a significant change in Cogeco's evolution. The entry into force of the Stock Savings Plan (REA) is a real launch pad. “Unparalleled happiness,” he says today, as new projects were subsequently blocked by difficult access to capital.

The REA allowed entrepreneurs to finance their growth through public offers and Quebecers to deduct stock purchases from their taxes.

It was thanks to the REA that Cogeco was able to buy its first radio station in Laval in 1986, now Rythme FM. Cogeco now owns 13 since it acquired Corus stations in 2011, including 98.5 FM.

Do you see how to be patient? It took 25 years to build this network of radio stations.

From Cogeco's IPO in 1985, acquisitions and takeover bids began to mix. “It corresponds to the time when families wanted to sell,” he explains. Because we've always only bought things that people want to sell.

Despite many deals, the company remains in the shadow of other players, both in cable TV and in the media, and the brand is less recognized than others. Liberal MP Pierre Arcand, who owned radio stations and worked in the industry for decades, describes Cogeco as a diverse company in many areas, but "number one in nothing". They were always a close second ”, he illustrates in a telephone interview.

Complicity with the family

Father and son Audet are nonetheless determined and enjoy moving the company forward. Together. “There was a great band”, Louis Audet says. When my dad decided to retire, we got to a point where we barely needed to talk to each other. It is unique in my life. We looked at each other, we said there was such a problem, we said yes, we'll take care of it. We didn't have to make big drawings. "

" Yes, that's right, we had a lot of fun, "he adds. But it is clear that we did things we could have done without. That was a disappointment."

Louis Audet calls the unfortunate purchase of 39 regional weekly newspapers in the 1980s. Or the recent foray into data hosting with Cogeco Peer 1, sold in 2019 due to strong competition from giants Amazon, Google and Microsoft.

The question of Cogeco's growth opportunities will inevitably come up in the coming weeks, following the rejected claims of the tandem Altice USA and Rogers. But even if the family controls the majority of the voting rights in the company, it is no longer an Audet that drives the growth and will set the game plan.

In 2018, when Louis Audet stepped down as President and CEO of Philippe Jetté, an engineer by training who has held senior management positions since 2011, everyone talked to him about family succession. But the businessman insists: a company like Cogeco can remain independent, even if it is not run by the family.

Cogeco, however, has a card up its sleeve: Louis & # 39; daughter, Émilie, 30, a McGill University graduate in international management and a master's degree from Queen & # 39; s University in international business. She joined the company on September 14, amid a storm caused by the proposed acquisition.

She will have no special favor. Like me, she starts at the bottom of the ladder and if she shows talent, she will rise in the organization.

“On the other hand, there's one thing she won't do won't escape, he notes. One day she will own shares. Whether she is the head of the company or not, she will have to ensure that Cogeco remains true to its values. "

Louis Audet places respect at the top of Cogeco's list of values ​​and the unity of the family at the heart of the company's philosophy and goals. Family heirlooms burst when some members lose sight of these goals, he says.

" I was very happy that my two sisters and my two brothers trusted me, that they supported me. Their support has been tangibly and vividly demonstrated in recent days in particular. I was lucky, the company is so lucky, 'said the businessman, who ran the family business for 25 years.

“When we make a decision, we don't ask ourselves whether it will be right in two years. We say to ourselves, will the next generation curse or bless us? "