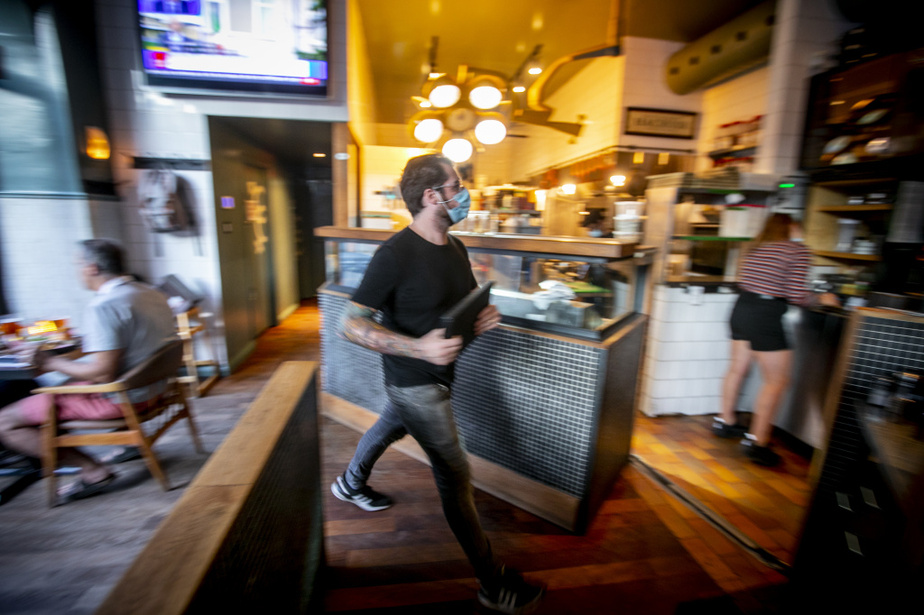 Temporary closure of bars and restaurants will dealt a fatal blow to some, say industry stakeholders. Posted September 29, 2020 at 6:00 am

Chef Martin Ore and his business partner have been raising money in recent months to keep their Peruvian restaurant Mochica alive. The announcement of restaurants closing for 28 days in the red zones, including Montreal and Quebec, is hard to digest for the Saint-Denis establishment. "Restaurants and bars are still the black sheep of the gang", Mr Ore complains.

According to him, most establishments have followed public health rules to the letter and do not deserve to stop their activities for 28 days. “It wasn't in restaurants that there were outbreaks. It's really unfair.”

The closure of bars and dining areas in restaurants, even temporarily, will deal a fatal blow to several establishments, estimates the Association Restauration Québec. (ARQ). "We cannot think it will have no consequences," said ARQ vice president of public and government affairs, François Meunier, without hesitation. There are many people who were already in debt because of the spring shutdown. They will not be able to seek other loans. Restaurants Canada, an association representing 6,000 Quebec restaurants, says nearly 40% will not survive by the end of the year.

Even if Quebec promises aid, the measure goes awry.

We are going to get people to have parties at home. Restaurants are not the place to be. We can see that they are more the private houses [le problème]. We become a bit of a symbol. We are used to getting the message across to the population.

François Meunier, Vice President of Public and Government Affairs of the ARQ

In the city center, Chef Helena Loureiro, owner of the Helena and the Portus, also thought that restaurants were "unloved children". This blow will not help the already weakened industry, she says. “In my opinion, 60% of the restaurants in Montreal will close. Minimum. »

Co-owner of Bouillon Bilk and Cadet, also in the center, Mélanie Blanchette understands the reasons behind these measures, but hopes the industry will not be stigmatized by this new shutdown. "We've worked so hard, we take it seriously, it's our job. Nobody will lose anything when there are 15 people at home. We could lose our business.

She hopes that, after this crisis, the government and the city will lose out." a real reflection will begin on how Montreal can shine after the pandemic. "We are known for our restaurants, people flock to it. Do we still want to bet on this? If so, it will at some point needed to loosen the wallets of restaurants and hotels.

Major chains, such as St-Hubert, are also hit hard. The Roast Chicken King operates restaurants in the Montreal Metropolitan Community (CMM), Quebec City and Chaudière-Appalaches , the three affected areas. The company will have to close 67 rotisseries. "We are still quite disappointed," admits Richard Scofield, chairman of the St-Hubert group.

In Quebec, Fabio Monti, co-owner of Ophelia and Atelier, tried to stay positive. “We understand the situation,” he says. We expected the fall to be tough. We are thinking of taking it out. All we want is for people to make an effort. "

A crisis in the bars?

Pierre Thibault, founder and president of the Nouvelle Association des bars du Québec (NABQ), which has 200 members across Quebec, fears a "crisis" in the industry. "We have just closed several businesses," recalls the man who also owns the Tavern Saint-Sacrement, on the Plateau Mont-Royal. This is a choice the government has made to calm things down. The priority is public health, schools. We can all agree on that. The fact remains that we will have a crisis.

Mr. Thibault believes that the aid measures that the Legault administration is expected to announce shortly, according to what the Prime Minister said Monday, are the only 'ray of hope' for restaurateurs and bar owners.

"Those 28 days will be appalling to many entrepreneurs, "he says bluntly. But if the economic measures are effective and implemented quickly and we have managed to control the spread in 28 days and we can reopen on a solid basis … maybe it's a roll of the dice. We'll see. We'll find out in 28 days. "

Hotels open, but not spared

The Legault government did not impose closures in the tourism and hotel sectors, but the latter still expects to face difficult times.

"Already, when we entered the orange mode, we saw the number of riders decrease, we felt it the same day," said Chairman of the Board of Directors of the Association Hôtellerie Québec, Dany Thibault.

The passage of three large red areas will speed up the movement.

Mr. Thibault notes that there has been a minor recovery, particularly in business tourism.

“Now everything that was planned between September 20 and October 31 is being canceled. It is the same phenomenon, at a lower volume, that we experienced on March 14 and 15.

In addition, the authorities now discourage travel between regions. "Quebeckers, the people of Ontario who were traveling for the fall colors, will stay at home," said Thibault.

"It worked very well this summer, there was a lot of travel by people from Montreal and Quebec to the regions," he recalls. But with Public Health's recommendations, these trips will be rarer.

"For companies trying to bail out a little more from the treasury, we miss three great weekends that would have made it possible to raise money," mourns Mr. Soucy, who understands that of a public health problem.

– With the collaboration of Iris Gagnon-Paradis and Marie Tison, La Presse